Sanatmetal opened a factory in Russia

The ribbon cutting ceremony of Hungarian based Sanatmetal Ltd’s new factory was held in Obninsk, Russia in the beginning of July. By establishing the factory as a result of a joint investment by Eger based Hungarian Sanatmetal Ltd and its Russian distributor partner, the Hungarian-owned middle-sized company conducted a technology transfer and its Russian distributor will look after the organization of sales and market lead generating activities. The 250-million Ruble new factory was financed from Sanatmetal Ltd.’s own resources as well as bank loans. 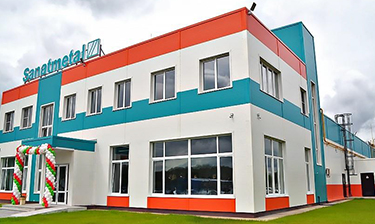 The Eger (HU) based med-tech company has been operating on the Russian market for more than 15 years. Its traumatological devices are well-known and popular in Russia. Its intramedullary nailing and instrument systems have been praised that “they work as efficiently as a Kalashnikov” in reference to their accuracy.

As it is a practice all over the World, Russia also concentrates on satisfying its own national healthcare needs. Sanatmetal’s technology is a combination of three multinational companies’ technologies and several Hungarian innovations. The Russian government’s steps for improving the country’s internal healthcare supply projected the need for building a new factory. That was the point when the Eger based company with its local Russian partner decided the technology transfer and factory building.

The 100 % Hungarian owned Sanatmetal Ltd. is amongst the TOP 40 companies of Europe in its profile, having 50 years of experience in the field. The company is an innovator and certified manufacturer of traumatological, spine surgical, dental implants and joint replacement (hip and knee) prostheses and devices. The company’s technology and culture were formed by three world leader multinational companies – strategic partners – as well as the BSI, FDA, Anvisa as well as Hungarian certifying bodies. The Russian factory will operate as a premise of Sanatmetal, therefore the manufacturing processes and all other procedures will be identical to the Hungarian ones.
Sanatmetal CIS will handle manufacturing, sales, import and – hopefully – export to the Eurasian market. The main purposes of opening the new factory were to increase the company’s Russian market share and to enter the Eurasian market.

The factory building had started in the autumn of 2016 and ended in July 2018. On a one-hectare area a 1500 square meter manufacturing and supplying site was established. Modern manufacturing processes of medical devices were established in Obninszk, initially employing 20, later 60 employees. A specialist group has already participated in a 6 week-long training so qualified professionals will look after the operations from the beginning.

The mother company is a recognized player in the world market and a strategic partner of multinational companies. The company’s qualification is certified by the BSI and the American FDA. The Russian subsidiary will use the same raw materials, imported from West-Europe, Japan and the United States, as the mother company does. Its manufacturing procedures, as well its products, will live up to the European and American standards in all aspects, which will be regularly monitored by auditing authorities. The factory’s product range was formed to satisfy the Russian market needs in traumatological and orthopaedical fields. Therefore, to supply for the special treatment of bone fractures, the company is equipped to manufacture different types of screws, plates, intramedullary nails and hip- and knee prostheses components for joint replacement. The variety of the products manufactured here will continuously expand.

The overall plan is to manufacture 150-180 thousand devices in the first period (screws, plates, nails, heads, shafts, cups) and the machinery and number of employees were arranged accordingly. In order to enable quick and easy future expansion which require high-level infrastructure, the factory’s core has already been established in a way that enables significant increase in capacity. The first investment phase can be followed by further expansions based on Russian market needs.